After a stunning victory at yesterday’s municipal election, Mayor-elect Sherry Sullivan was warmly welcomed by all members of the City Council.

In a landslide victory, Mayor-elect Sullivan received 58% of the vote in a four way race leaving only 25% of the votes to incumbent Mayor Karin Wilson.

6,546 residents voted in the election with each winning candidate receiving at least 55% of the vote. With 1,628 votes, incumbent Mayor Wilson lost 52% of voters from her 2016 campaign. 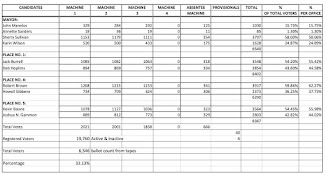 This dedicated, hard working group of individuals said they are excited to serve Fairhope in the coming years and would like to thank everyone for their support.