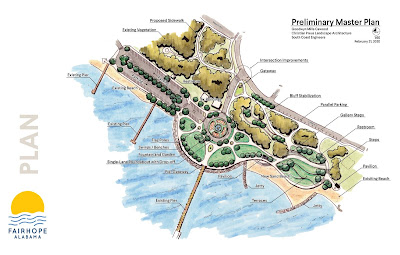 "Project Engineers, Planners and Landscape Architects for the City of Fairhope... presented a preliminary conceptual plan at the April 27th City Council Work Session. The purpose of the project is to make safe and user-friendly improvements to the 10-acre South Beach Park area (Municipal Pier) to enhance citizens’ use of the waterfront park facilities while ensuring the park’s long-term resiliency and sustainability." according to the City's website.
After immense public disapproval after the initial unveiling, the Fairhope City Council considers its options regarding the redevelopment of the city's most prominent public park. Council members noted they had received several complaints about the redesign, with the new parking layout being an especially egregious concern.
The City's release about the project states, "Plan development for the South Beach Park Project, thus far, has involved the expertise of professional engineers from a variety of disciplines, key city staff and elected officials, an independent steering committee, and state and federal funding agency representatives.".
The project is being paid for by the City of Fairhope’s $6.2 million RESTORE (Resources and Ecosystem Sustainability, Tourist Opportunities, and Revived Economies) Act Grant from the U.S. Department of Treasury.