Vice President Charles Lake presided over the August meeting due to President Lee Turner's absence. VP Lake brought the meeting to order promptly at 6:30 and began with the Invocation and Pledge of Allegiance.

Ken Niemeyer presented a thorough report on the progress and planning of the sewage lift station located on Fels Ave. The City is planning to relocate the station in the parklands at the end of Fels and fence off a large area of the park. Mr. Niemeyer has concerns the City is not considering the impact the project will have to the park or residents in the area.

Director Jim Reid immediately followed Mr. Niemeyer with his own exhaustive report on the situation. He noted a few corrections to misconceptions and stated the City may need additional Right of Way clearance on the project. To gain this clearance, the City would need to come ask the Colony for it due to the structuring of the park's deed to the City in 1931.

One of the representatives from the City who came to do a presentation on the planned upgrades to the parking garage, who didn't introduce himself, seemed to take offense at the idea the City would need to ask the Colony for the Right of Way. "Why do we need to ask for permission for something we own?", he asked. Mr. Reid noted that was one of the things he learned while working on his report was that the Fairhope Single Tax Colony is the steward for all of the park land donated by it to the City over the years and therefore, the City is only allowed to use the land as a park. Any other use must be approved by the Colony.

The City representative went on to describe the coming changes to the parking garage located behind the Hampton Inn. The City has received a $1.1m grant to make the alley and parking garage more attractive, better lit and easier to use. It will be called "Arts Alley". 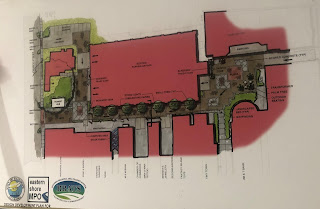 Ecumenical Ministries presented their capital campaign and requested $750,000 in funding. They noted they are celebrating 50 years of service to the Fairhope area.

The Baldwin Pops was on hand to thank the Colony for their previous 20 years of support and to request $2,000 to fund their annual Founder's Day Concert held at Henry George Park on the bluff. 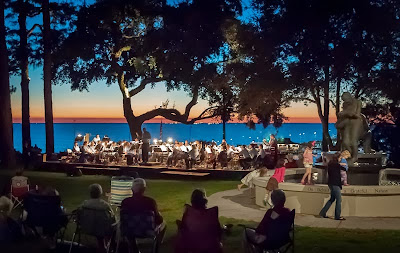 Treasurer Upchurch noted the Colony is in good standing and has started collected revenue for the coming tax bill.

The Archives Committee reminded everyone of the upcoming Barney Gaston Day on August 24th. It is held the last Sunday of August.

The upcoming class for new member applicants still has a few open positions for those interested in becoming a Colony member.

The Education Committee is producing a newsletter titled, "The Fairhoper" to illustrate the colony to newcomers and update citizens on coming events.

There was no President, Trustee or Secretary reports.

Director Cliff Pitman stated by his calculations, the Colony stood to profit $1m from the development of two unleased parcels of land totaling about 5 acres. He stated it is about time to decide to either develop the properties, or auction them to the highest bidder as the Colony has been known to do in the last 20+ years under his leadership. If the Colony decides not to develop the land, Director Pitman would like to buy the 110 acres Mr. Burmeister owns near the intersection of CR 13 and CR 32.

*The Fairhope Courier would like to note the stark contrast of these actions with the stated purpose of The Fairhope Single Tax Colony. One of the main tenants of philosophy behind the Colony, is to remove the benefit of withholding land from its best use with the intent to profit from the speculation of ever increasing value built by the surrounding community.

The Colony, for the first 90 years of its existence, leased land at no charge to anyone. Over the past 30 years of the current administration, the Colony has profited from the auction of its leaseholds to the highest bidder, in direct violation of its founding principles.
Labels: Colony Fairhope Fairhope Single Tax Colony FSTC Land Politics Public Meeting Notice