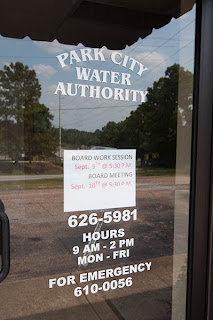 Calls to the Water Authority office on Thursday morning were answered by office manager Stacey Quaites, the only full time employee of PCWA, "Other employees are contract employees," she noted. When asked if the water authority had a public budget it operated under, "Yes," she replied. "They can give you all of the information you need at the next board meeting." The next work session of the board is Monday, September 9, and the next regular meeting is Tuesday, September 10. Both meetings start at 5:30pm. Emails to the board members have not been returned as of press time. Park City Water Authority meets the second Tuesday each month and is located at 6642 Park Drive Suite A, Daphne, AL 36526.


Park City Water Authority provides water service for approximately 410 customers located in a small community within Daphne city limits called Park City. It has been in operation since 1977 with an agreement from Daphne Utilities who provides the Authority with the water it then resells to its customers. Current water rates at the Authority are $22.28 for the first 1,500 gallons and $7.00 for each additional 1,000 gallons. This compares to Daphne Utilities rates which as of October 1st are $12.77 for the first 1,000 gallons and $2.78 for each additional unit of 1,000 gallons.
The Environmental Protection Agency estimates the average American household family of four can consume up to 400 gallons of water per day. This equates to an average of 12,000 gallons per month. If the average household consumes 12,000 gallons of water per month, the average Daphne Utilities customer would pay $43.35 while the average Park City Water Authority customer would pay $99.28.

“They tried to get Daphne to supply them with water but Daphne wouldn’t. For whatever reasons no one knows, and they had to go out and borrow the money themselves and many of the individuals involved spent many hours of their own time digging trenches, putting in lines, doing a lot of the work themselves. So it’s like giving up a baby and so the Utility board needs to look at it like that,” said Councilman John Lake who represents the district on the city council.
“There might be a little more to that story. Mr. Lake, I’m sure, knows more about the history of it than I do, but Park City I believe is an area that was there even before there was a city of Daphne and so there is a lot more to it,” stated Councilman and Utilities Treasurer Randy Fry. “I can’t tell you all of the history of how it came about and developed but it is a little bit of a disturbing situation because those citizens are definitely at a disadvantage.”
“I had recommended that the Park City Water Board be given an ex officio non-voting person on the Daphne Utility board to act as a communicating tool between the board and the utility during the change-over and during a certain period of time to allow for them to have a voice on the utilities.” Councilman Lake added.
“The bottom line is it would be a win situation for the residents of Park City which are in Mr. Lake’s district, but you really have got to address that with the Park City Water Board members,” remarked Councilman Fry.
Calls to the Park City Water Authority main office on Wednesday were forwarded to an answering service and questions during a call to the Service Department were referred to the board members. The Park City Water Authority’s next work session is September 9 and the next board meeting is September 10 at 5:30pm. Park City Water Authority meets the second Tuesday each month and is located at 6642 Park Drive Suite A, Daphne Al 36526.